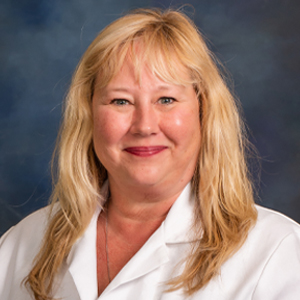 Sara Rhoades, FNP, was born and raised in Peoria, IL, and spent time in Florida before she and her husband decided to make North Carolina their home. She received her bachelor’s degree from Elmhurst College in Elmhurst, Ill., and her master’s degree from Northern Illinois University in DeKalb, Ill. Sara worked as a registered nurse in a level 3 NICU and was on the transport team for 21 years in Chicago. She became a nurse practitioner in 2014, working primarily in emergency medicine. She is DOT certified and has ACLS/PALS certifications.

Getting to Know Sara Rhoades:

Sara and her husband are extremely involved in animal rescue. They are volunteers at the Basset Rescue of Florida and the Carolinas. Sara is a volunteer and team leader at Small Paws Rescue in both Illinois and Indiana. She has two black labs, a senior basset hound, three bichons and a cat – all rescues.